Making Learning to Code Friendlier with Art — An Interview with Dr. Allison Horst 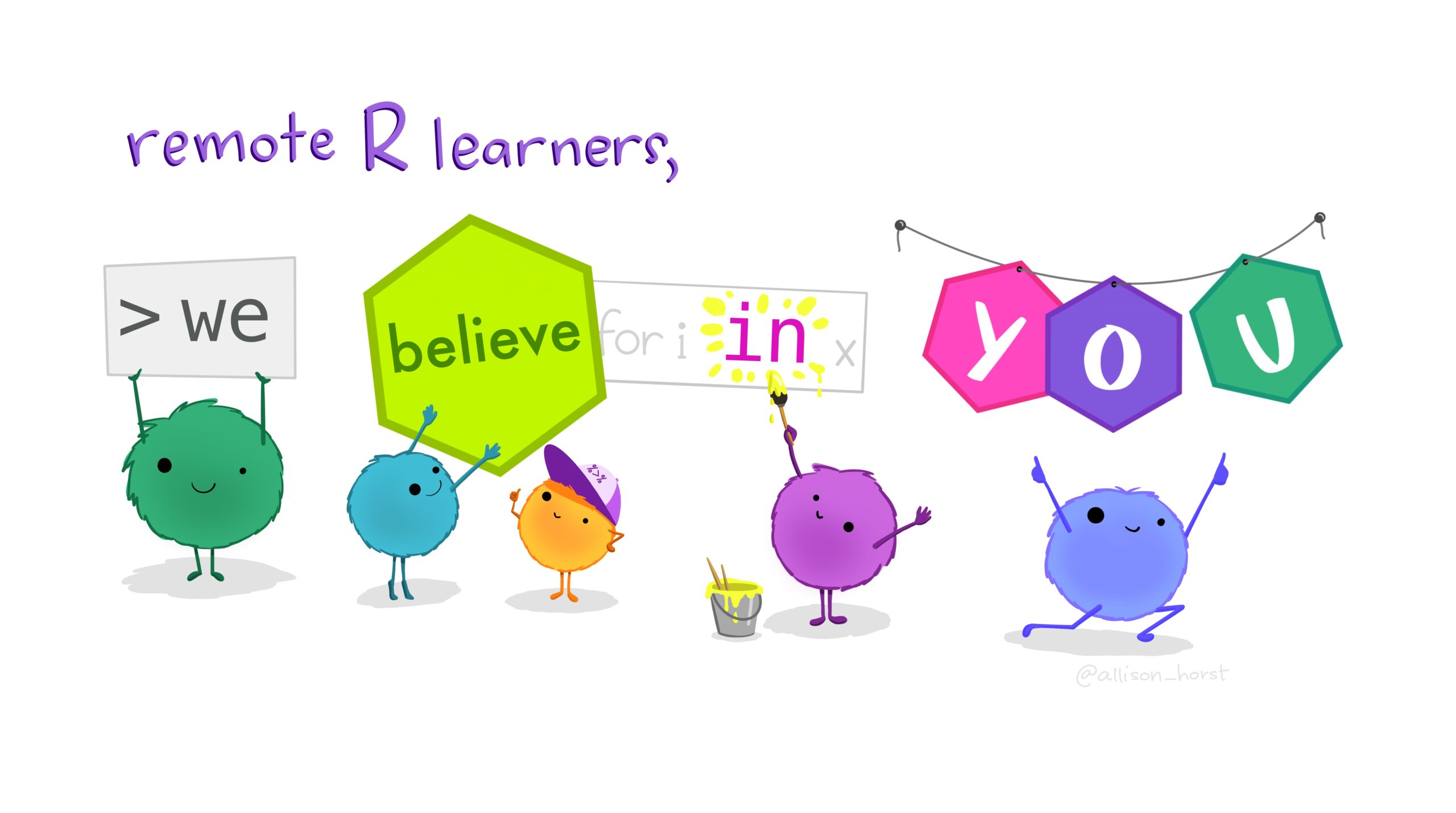 Can the encouragement of fuzzy monsters help you learn to code? (Source: Allison Horst’s Github)

When you think about data science and programming, you probably aren’t thinking about art. You probably don’t picture the functions in your code as cute, fuzzy monsters, or your data as colorful gems. But Dr. Allison Horst does.

If you’ve thought about learning R before, there’s a good chance you’re familiar with Allison’s work. She’s an Assistant Teaching Professor in data science, statistics, and science communication at the Bren School of Environmental Science & Management at UC Santa Barbara, but she’s also RStudio’s artist-in-residence, where she makes illustrations like these:

(These images are from Allison’s Github, by the way, where they and many more are available under a CC4.0 license).

If looking at those cute fuzzballs put a smile on your face for a moment, well, that’s the point. Allison’s R art has a very specific purpose, and it’s a powerful reflection of something special about the R community.

Allison’s academic background is in engineering and environmental science — she did her PhD on how nanoparticles interact with bacteria — but she also has a history with art.

“Since I was little, I have been doing artwork,” she says, “and I have a background in fine art as a plein air landscape painter. I just loved being able to go out in nature and paint what I see.”

“Once I started teaching, I noticed that when I would look in a lot of other fields like ecology and marine science, they would have these beautiful pictures of them out in the field working and really cool illustrations of the organisms that they were working with.”

“Meanwhile, when I was teaching data science, I would try to make engaging slides representing data science and statistics, and I was just not that excited about what I was finding.”

“At one point, I realized I was trying to teach a class and I was introducing the mutate function from dplyr,” she says. “And on the screen behind me was a screenshot of the R documentation for the package.”

“I thought: this is a serious mismatch! I’m up here like, ‘This is so cool! Mutate is awesome, look at these cool things that you could do!’ And then on the screen behind me is just this dense text with arguments they don’t understand.”

That’s how she got started making R illustrations. “I thought, ‘There’s got to be some better visual entryway the first time students are introduced to a function.’”

While the longer-term impacts of using fuzzy R characters to learn data science have not been evaluated, Allison says she’s definitely noticed a difference. “When I introduce something [now], I put a slide up in the background [with those characters] and then there’s a classroom of students smiling and laughing,” she says.

“That, for me, is the best thing. People are being introduced to something about coding, maybe for the first time, and they’re smiling about it.”

Years later, that’s still what’s driving her to turn R functions into cute, fuzzy creatures. “All of it is towards a goal of trying to make R, and data science in general, more approachable, welcoming, and engaging to diverse learners.”

Joining the #rstats Community and RStudio

At first, though, Allison’s illustrations were strictly for the students in her classroom. “I had resisted joining Twitter for years and years,” Allison says, “until I was working on art for Openscapes and my dear friend and awesome marine data scientist, Dr. Julia Lowndes, finally convinced me [to share some art there].”

“I think the first one I shared might’ve been the dplyr wrangler. And the community response was so positive and so supportive that it made me want to do more artwork.”

“I’ve gotten so much from the community, not only from what I’ve learned in terms of art skills and data science skills, but also just the encouragement to contribute creatively. I started creating more, still with a focus on creating artwork for my grad students, but it seemed like there was a broader audience that was appreciating the illustrations.”

In 2018, while Allison was an artist-in-residence at the National Center for Ecological Analysis & Synthesis, RStudio reached out to her to comlesson some work for the Birds of a Feather sessions at the 2019 RStudio Conference. That collaboration turned into several more, and ultimately, an artist-in-residence position at RStudio.

“I had a conversation with Hadley [Wickham] about what I would like to do, which was mostly continue contributing artwork in ways that lower learning barriers and welcome more R users,” she says.

“Since then, I’ve been just doing artwork for education and outreach, and just because I think it’s fun for people […] I’ve been happily the artist in residence with RStudio since fall of last year and have been really excited to be partnered with them.”

The R Community and the Importance of Being Inclusive

If you search the job listings of most data science companies, you aren’t likely to find an “artist-in-residence” position. So why is RStudio different?

“RStudio is so invested and demonstrating that they value kindness and being welcoming and supporting diverse learners,” Allison says. “I think that supporting artwork that contributes to that is one of many ways that they’re doing that as part of a broad effort to make the community more inclusive.”

Inclusivity is a value that’s apparent throughout the R community. It’s something you can see by simply browsing the #rstats hashtag on Twitter. Part of the reason for that, Allison says, is good leadership: “I think it’s pretty amazing to see those values that are visible and verbalized from the people at the very top.”

“The visibility of those values and priorities coming from leaders in the R community – leaders from RStudio and other groups – emboldens other people to know these are things that this community values.”

Those values run deep throughout the R community. That’s evident from the existence of influential, inclusivity- and diversity-focused organizations like RLadies, R-Forwards, Minority R Users, Africa R Users, LatinR and many more.

“Another one of the biggest reasons I think that the R community feels so inclusive is because of RLadies,” Allison says. “And I’m really excited to see other initiatives getting started, like Minority R Users, which is being started by Dorris Scott and Danielle Smalls-Perkins. and makes the community even more diverse and inclusive.”

(We recently spoke with Shelmith Kariuki, one of the leaders of Africa R Users — click here to read that interview.)

With years of experience teaching R, Allison also has some thoughts about how new R learners can help themselves reach their goals.

Her first tip should come as no surprise: “Join the community early on. It’s a great source of support and encouragement and sharing new tools.”

“It can seem scary,” she says, “Because you’re like, ‘I don’t know any of these people!’ I think that new users would be amazed by how supportive the R community is, particularly on Twitter, but also at conferences and in R-Ladies.”

“That’s true for users and learners at every level. Everybody is just psyched that you want to learn R and join this community. I wish I could have convinced myself years ago of how important and motivating that would be.”

Second, she says, is to take advantage of the amazing free resources the R community has on offer. “The community is also really committed to open access to a lot of learning materials,” she says. “That includes video courses and books in bookdown, the R for Data Science online learning community, and tutorials and blog posts.”

“I think I’ve learned more new skills from blog posts than any other means of learning since I’ve been using R,” she says, “so embrace those nontraditional and amazing resources and tutorials that people are creating and sharing freely in the R community all the time.”

(Dataquest offers free, interactive R lessons and also a growing library of free R tutorials, and there’s a list of other helpful R resources at the end of this post.)

Another piece of advice? “Don’t feel like you have to do a massive project every time to learn something,” Allison says. “Try one new function every week. Participate in Tidy Tuesday. Do little low stakes things very frequently. I think that that’s the best way to start feeling comfortable.”

That’s an approach she’s embracing in her own classroom, she says. “I’ve tried to push my assignments that way, moving towards high frequency, lower stakes, high variety, little assignments to build more skills and create the comfort of repetition. ”

“The repetition, I think, is really valuable for learners.”

Allison also encourages new learners to try things and share their work online, even when what they’ve tried didn’t work. “I love seeing people post imperfect things,” she says. “It’s not a competition. It doesn’t have to be perfect. The point is that you tried something, you did some practice, and then you share it with people. That’s the spirit of Tidy Tuesday.”

She also had some advice to offer for folks hoping to switch into a career in data science: embrace the subject area knowledge you already have and combine that with your data skills. “That combination is really powerful,” she says. “When you have domain expertise you can say, “Not only do I have domain expertise, but on top of that I have the skills that I need to answer questions in this field.’”

“It’s really powerful to have somebody who can come in and be like, ‘I can do all of this data analysis, but also I understand enough to know how to do it responsibly and communicate with different stakeholders.’”