The project is part of our Statistics Fundamentals course, and it assumes some familiarity with:

If you think you need to fill in any gaps before moving forward, we cover the topics above in depth in our Statistics Fundamentals course. This course will also give you deeper instructions on how to build this project, and code it in your browser.

To learn more about pandas and matplotlib, check out our Data Scientist Path.

In October 2015, Walt Hickey from FiveThirtyEight published a popular article where he presented strong evidence that suggested Fandango’s movie rating system was biased and dishonest. In this project, we’ll analyze more recent movie ratings data to determine whether there has been any change in Fandango’s rating system after Hickey’s analysis.

We’ll work with two samples of movie ratings: the data in one sample was collected previous to Hickey’s analysis, while the other sample was collected after. This will help us compare the system’s characteristics previous and after the analysis. Fortunately, we have ready-made data for both these periods of time:

Let’s start by reading in the two samples (which are stored as CSV files: fandango_score_comparison.csv and movie_ratings_16_17.csv) and getting familiar with their structure.

Below, we isolate only the columns that provide information about Fandango, to make the relevant data more readily available for later use. We’ll make copies to avoid any SettingWithCopyWarning later on.

Our goal is to determine whether there has been any change in Fandango’s rating system after Hickey’s analysis. The population of interest for our analysis is made of all the movie ratings stored on Fandango’s website, regardless of the releasing year.

The data we’re working with was sampled at the moments we want: one sample was taken previous to the analysis, and the other after the analysis. We want to describe the population, so we need to make sure that the samples are representative. Otherwise we should expect a large sampling error and, ultimately, wrong conclusions.

From Hickey’s article and from the README.md of the data set’s repository, we can see that he used the following sampling criteria:

The sampling was clearly not random because not every movie had the same chance to be included in the sample — some movies didn’t have a chance at all (like those having under 30 fan ratings or those without tickets on sale in 2015). It’s questionable whether this sample is representative of the entire population we’re interested to describe. It seems more likely that it isn’t, mostly because this sample is subject to temporal trends — e.g. movies in 2015 might have been outstandingly good or bad compared to other years.

The sampling conditions for our other sample were (as it can be read in the README.md of the data set’s repository):

This second sample is also subject to temporal trends and it’s unlikely to be representative of our population of interest.

Both these authors had certain research questions in mind when they sampled the data, and they used a set of criteria to get a sample that would fit their questions. Their sampling method is called purposive sampling (or judgmental/selective/subjective sampling). While these samples were good enough for their research, they don’t seem too useful for us.

Changing the goal of our analysis

At this point, we can either collect new data or change our the goal of our analysis. Let’s choose the latter and place some limitations on our initial goal.

Isolating the samples we need

With this new research goal, we have two populations of interest:

Although one of the sampling criteria in our second sample is movie popularity, the sample doesn’t provide information about the number of fan ratings. We should be skeptical once more and ask whether this sample is truly representative and contains popular movies (movies with over 30 fan ratings).

One quick way to check the representativity of this sample is to randomly sample 10 movies from it and then check the number of fan ratings ourselves on Fandango’s website. Ideally, at least 8 out of the 10 movies have 30 fan ratings or more.

Above we used a value of 1 as the random seed. This is good practice because it suggests that we weren’t trying out various random seeds just to get a favorable sample.

90% of the movies in our sample are popular. This is enough and we move forward with a bit more confidence.

Let’s also double-check the other data set for popular movies. The documentation states clearly that there’re only movies with at Yealeast 30 fan ratings, but it should take only a couple of seconds to double-check here.

If you explore the two data sets, you’ll notice that there are movies with a releasing year different than 2015 or 2016. For our purposes, we’ll need to isolate only the movies released in 2015 and 2016.

Let’s start with Hickey’s data set and isolate only the movies released in 2015. There’s no special column for the releasing year, but we should be able to extract it from the strings in the FILM column.

Great, now let’s isolate the movies in the other data set.

Comparing distribution shapes for 2015 and 2016

We’ll start with comparing the shape of the two distributions using kernel density plots. We’ll use the FiveThirtyEight style for the plots. 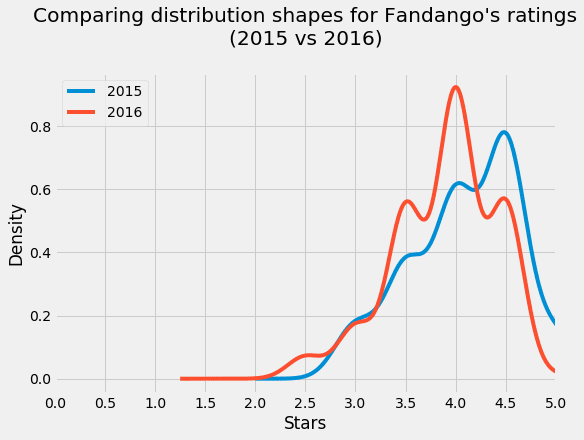 Two aspects of the figure above are striking:

The left skew suggests that movies on Fandango are given mostly high and very high fan ratings. Coupled with the fact that Fandango sells tickets, the high ratings are a bit dubious. It’d be really interesting to investigate this further — ideally in a separate project, since this is quite irrelevant for the current goal of our analysis.

The slight left shift of the 2016 distribution is very interesting for our analysis. It shows that ratings were slightly lower in 2016 compared to 2015. This suggests that there was a difference indeed between Fandango’s ratings for popular movies in 2015 and Fandango’s ratings for popular movies in 2016. We can also see the direction of the difference: the ratings in 2016 were slightly lower compared to 2015.

It seems we’re following a good thread so far, but we need to analyze more granular information. Let’s examine the frequency tables of the two distributions to analyze some numbers. Because the data sets have different numbers of movies, we normalize the tables and show percentages instead.

The minimum rating is also lower in 2016 — 2.5 instead of 3 stars, the minimum of 2015. There clearly is a difference between the two frequency distributions.

For some other ratings, the percentage went up in 2016. There was a greater percentage of movies in 2016 that received 3.5 and 4 stars, compared to 2015. 3.5 and 4.0 are high ratings and this challenges the direction of the change we saw on the kernel density plots.

Determining the direction of the change

Let’s take a couple of summary metrics to get a more precise picture about the direction of the change. In what follows, we’ll compute the mean, the median, and the mode for both distributions and then use a bar graph to plot the values. 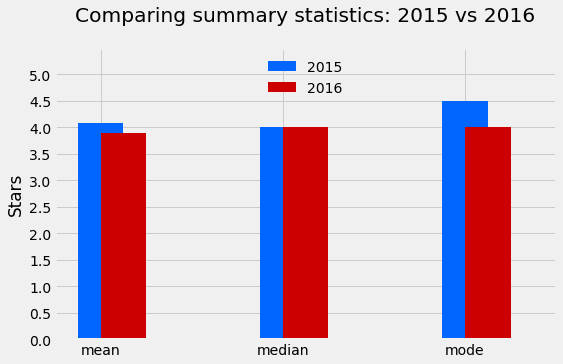 We cannot be completely sure what caused the change, but the chances are very high that it was caused by Fandango fixing the biased rating system after Hickey’s analysis. 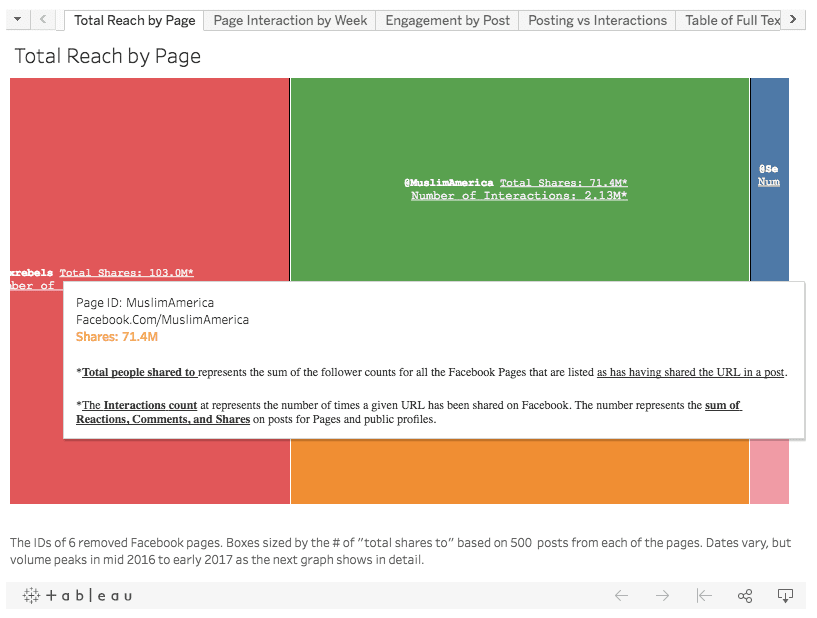 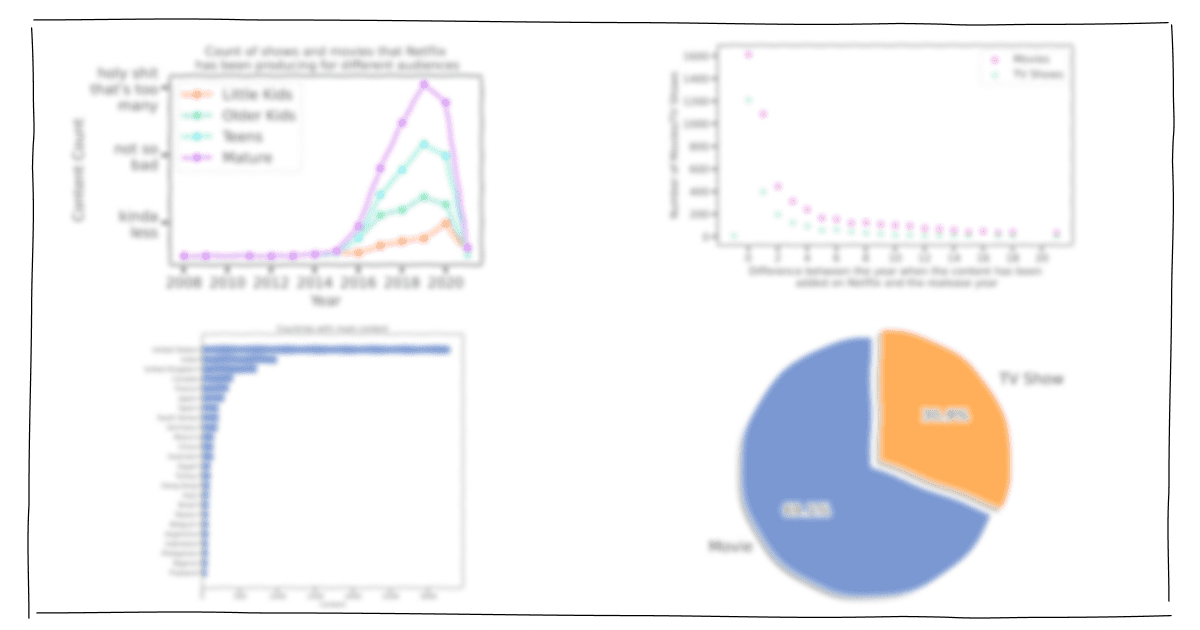