Learning From Bank Data: Women Across the World

This post looks at the World Bank World Development Indicators (WDI). This massive collection has data in several categories: demographic, education, work, poverty, health. It includes both country-level data and various aggregates by different criteria: geographical regions, income levels, etc. The UK Data Service has a useful guide as well as access to the data. You can also download it directly from the World Bank website (and it has an API which I haven’t tried), and there are tools like R packages.

A lot of the data is relevant to women’s and gender history, so much so that gender has its data portal. I’ve selected just a handful of significant indicators with the most comprehensive coverage (life expectancy, fertility, education), and I’ve done two series of graphs: the first uses the World Bank income level groupings, and the second takes a selection of six countries (chosen because they are varied geographically, culturally, in terms of income and in their data patterns, and because they have good data coverage, not for any kind of representativeness).

I’m sure there are no surprises here for people who study global development, but for me at least it’s been an educational experience. There seems to be quite a lot of good news for women in this data. The bad news is the sheer levels of inequality between income regions in many of the indicators.

Life expectancy for men and women

Life expectancy is one of the most long-running series in the data; most countries have it from 1960 onwards. This is a ‘faceted’ graph comparing female and male life expectancy at birth in the five income groups (and the world as a whole). The familiar observation that women live longer than men is not just a “Western” phenomenon, although it appears that the wealthier the country, the bigger the gap. The level of the continuing gap between the richest and poorest countries is one thing that has not much changed. 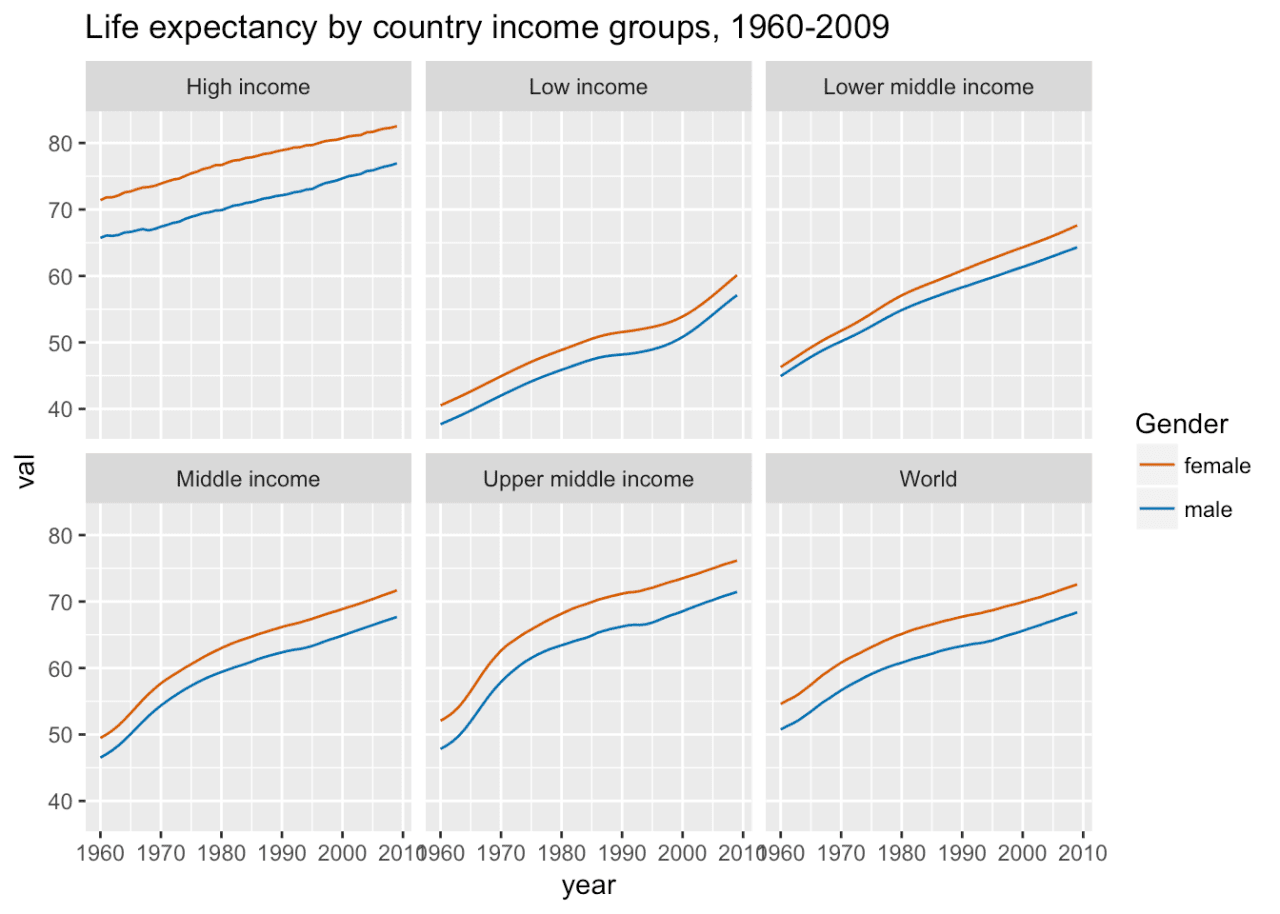 The second graph uses the same format to look at the six countries, and at country level there is more variation – even dips or periods of stagnation that counter the general upward trends. 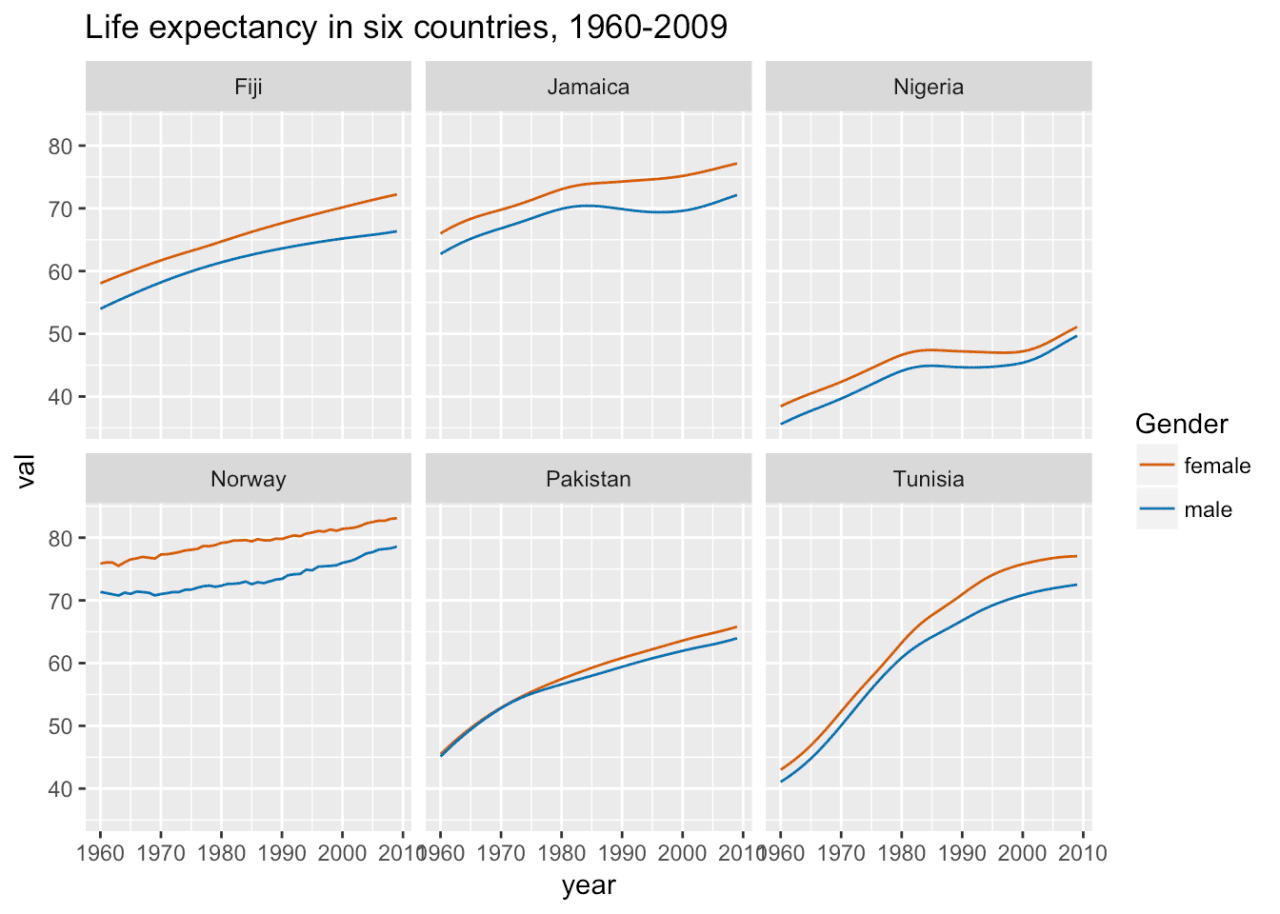 (Oops. I forgot to make nice labels for the y axes. That should be “years from birth”.)

This graph shows the data for the six countries in a different way. I think it’s a bit less clear in some respects, but it’s useful for comparing the countries at particular times, and how their trajectories vary. 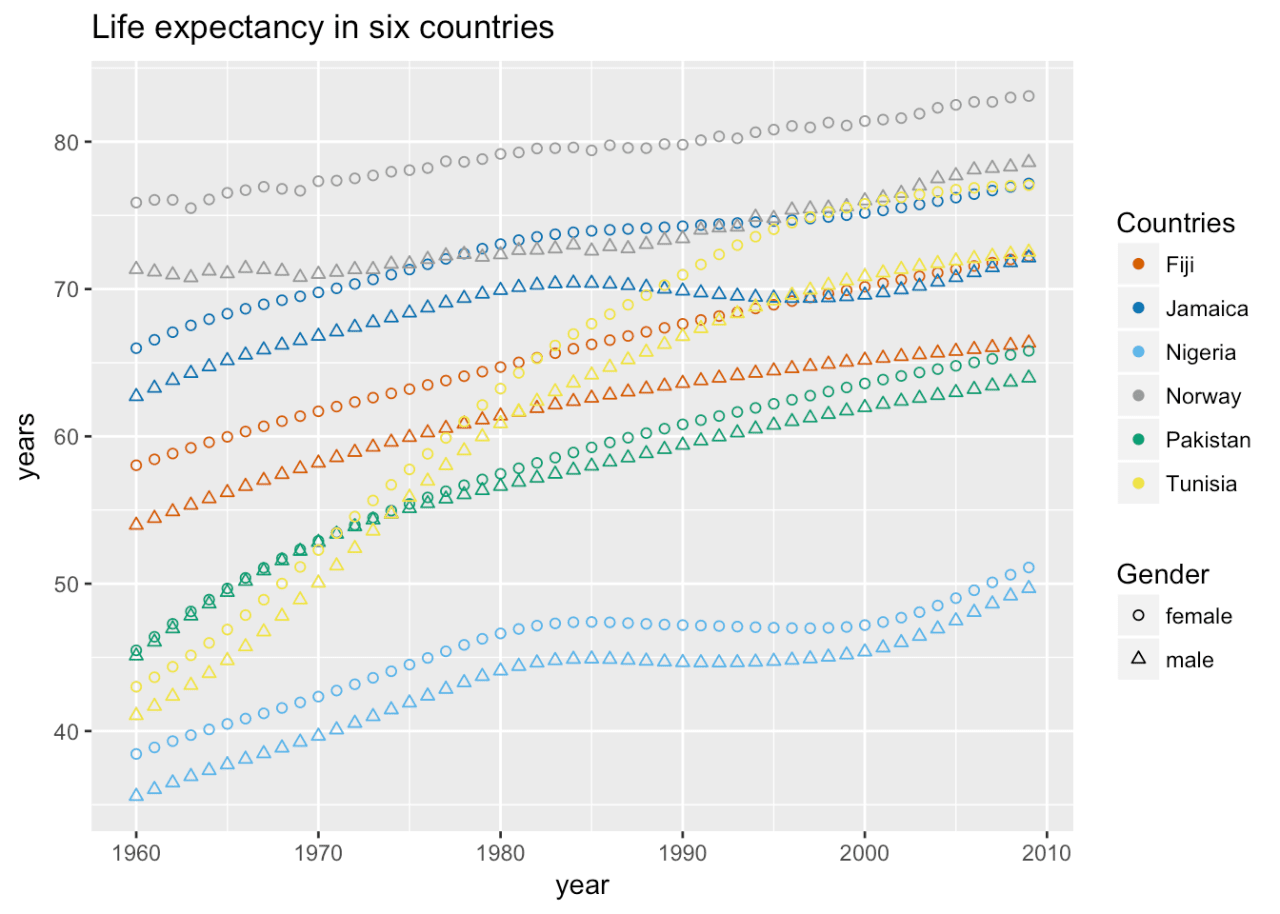 Fertility rates are also widely available from 1960. Women everywhere are having fewer babies than they were 60 years ago, but the most rapid falls have been in middle income countries. Again, the six countries show more variation. 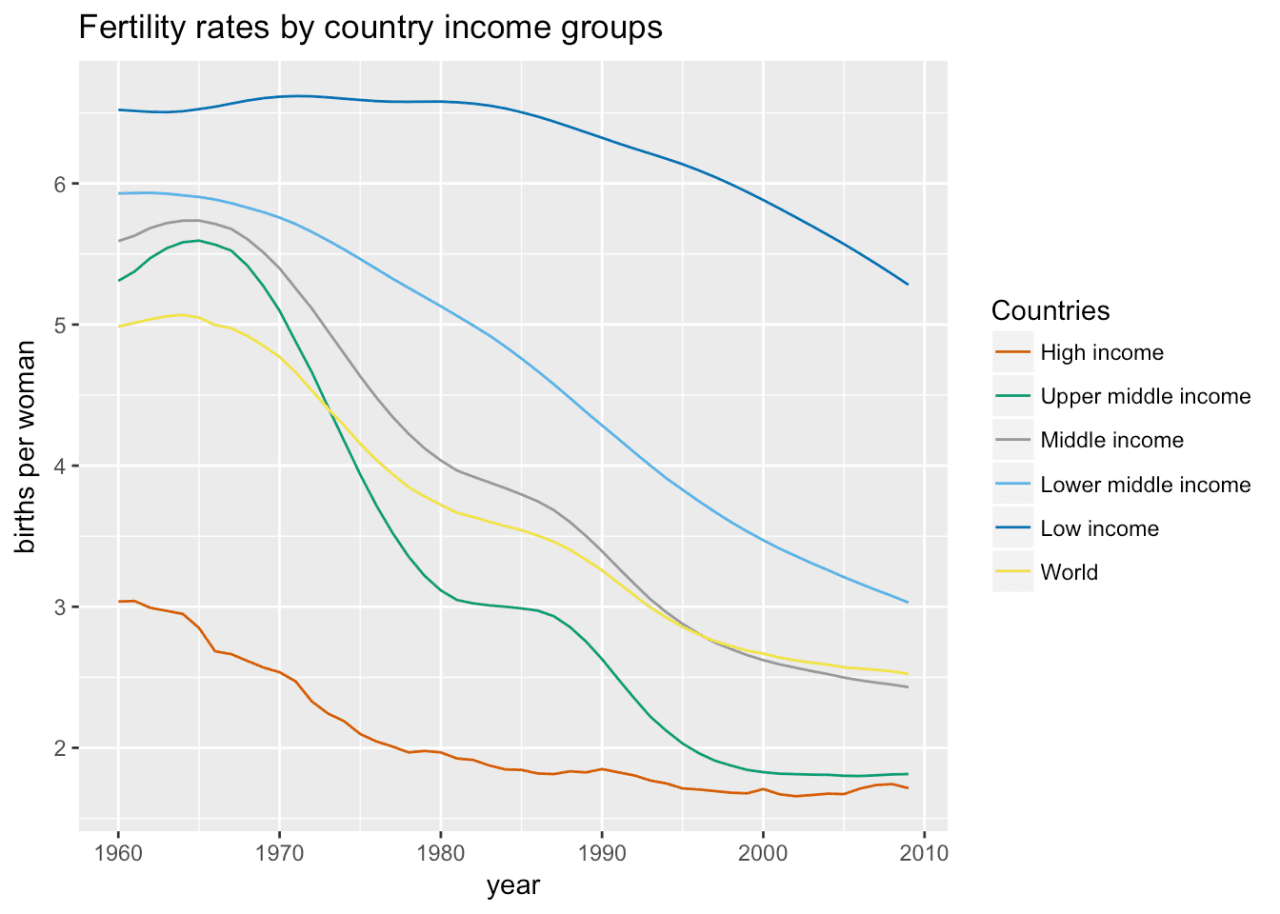 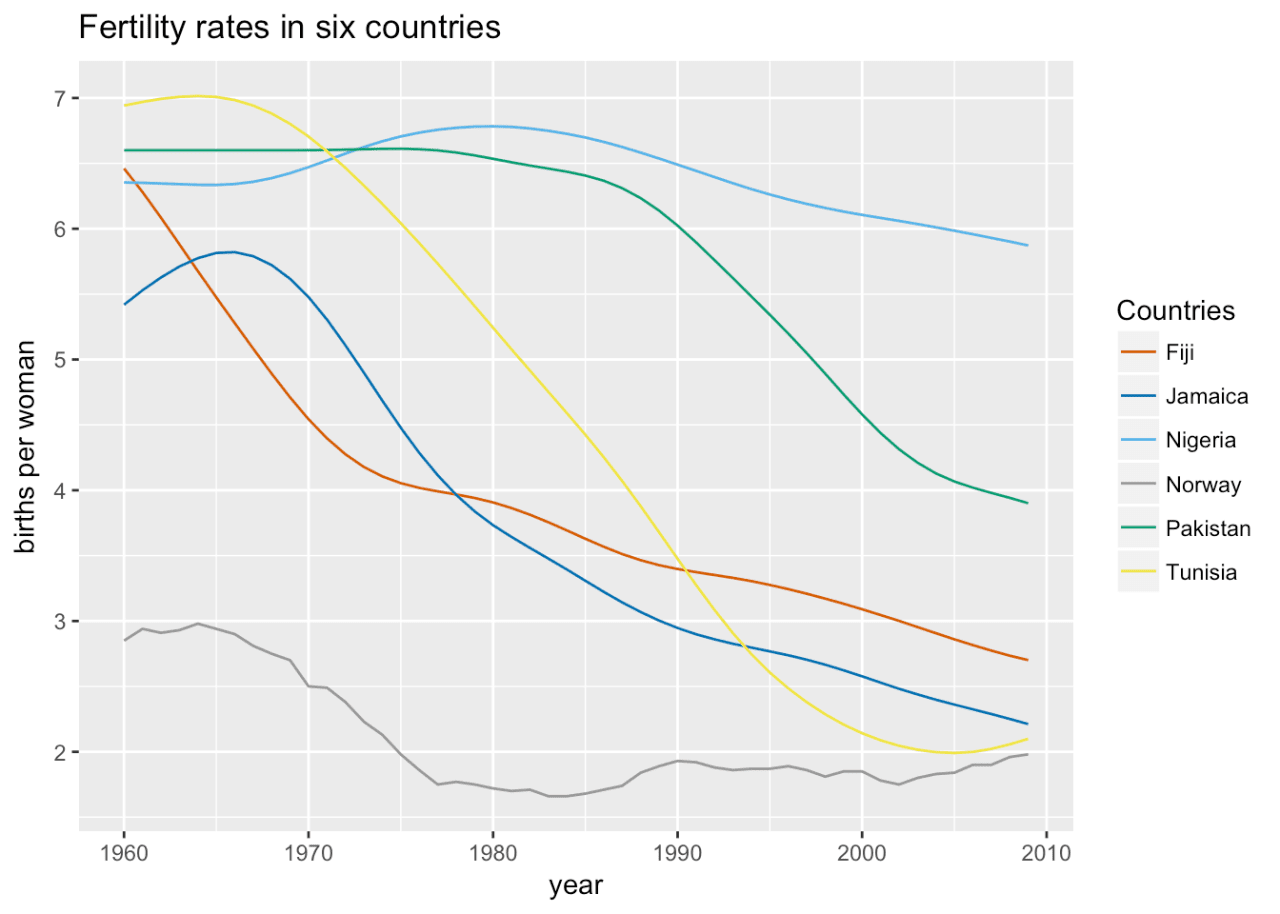 The education of girls

The World Bank’s earliest education data starts a bit later than the demographic indicators, from 1970 onwards. The most notable feature of this is the convergence across every income group at primary school level, and secondary education is not far behind except in the poorest countries. (Watch out for the difference in the scale of the y axis, and the perspective, of the two charts…)

There are a few more gaps appearing in the country data, especially in the secondary school data. Gaps can be frustrating of course, but they’re important for highlight questions I’d need to be asking about how the data was collected, and about the calculation of aggregates. 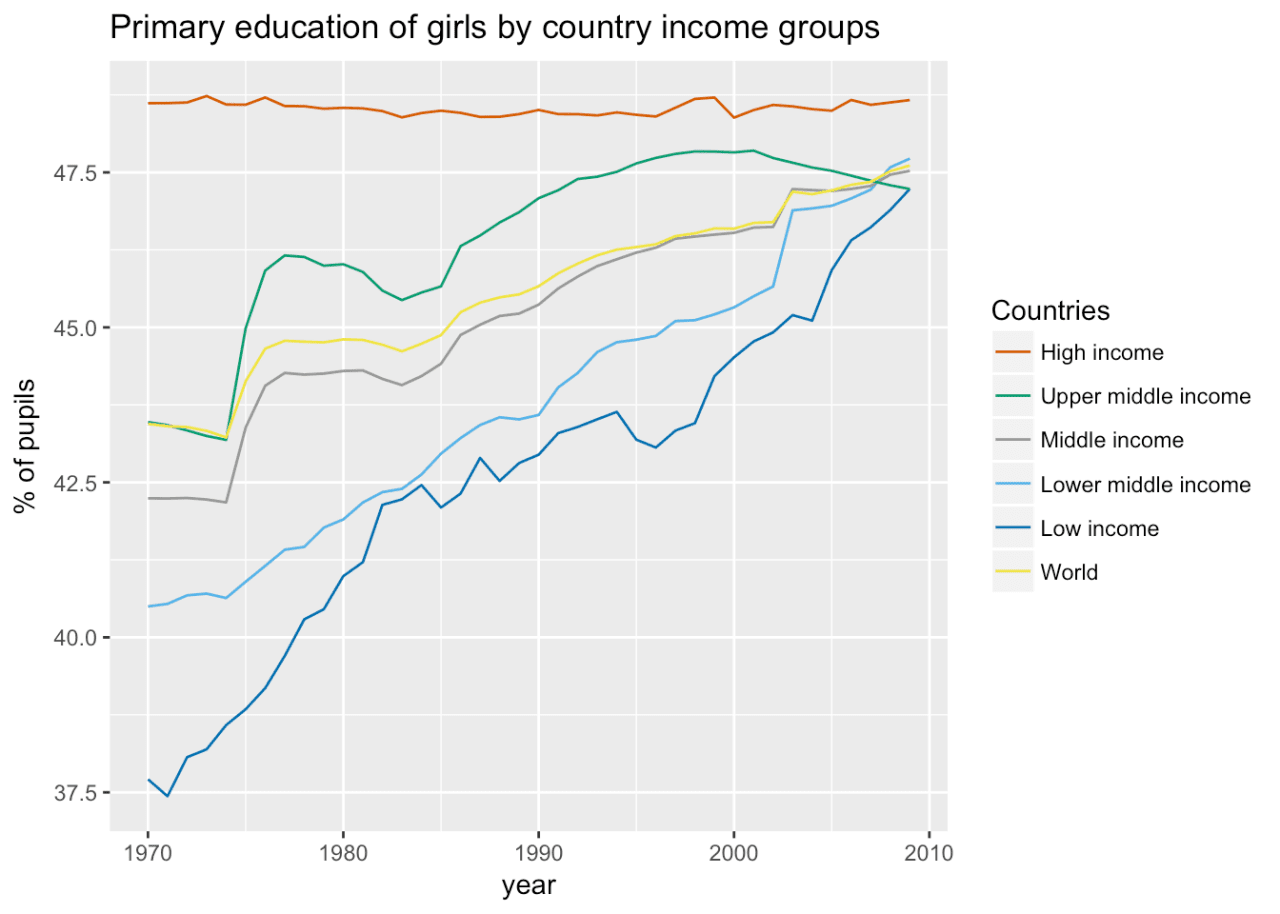 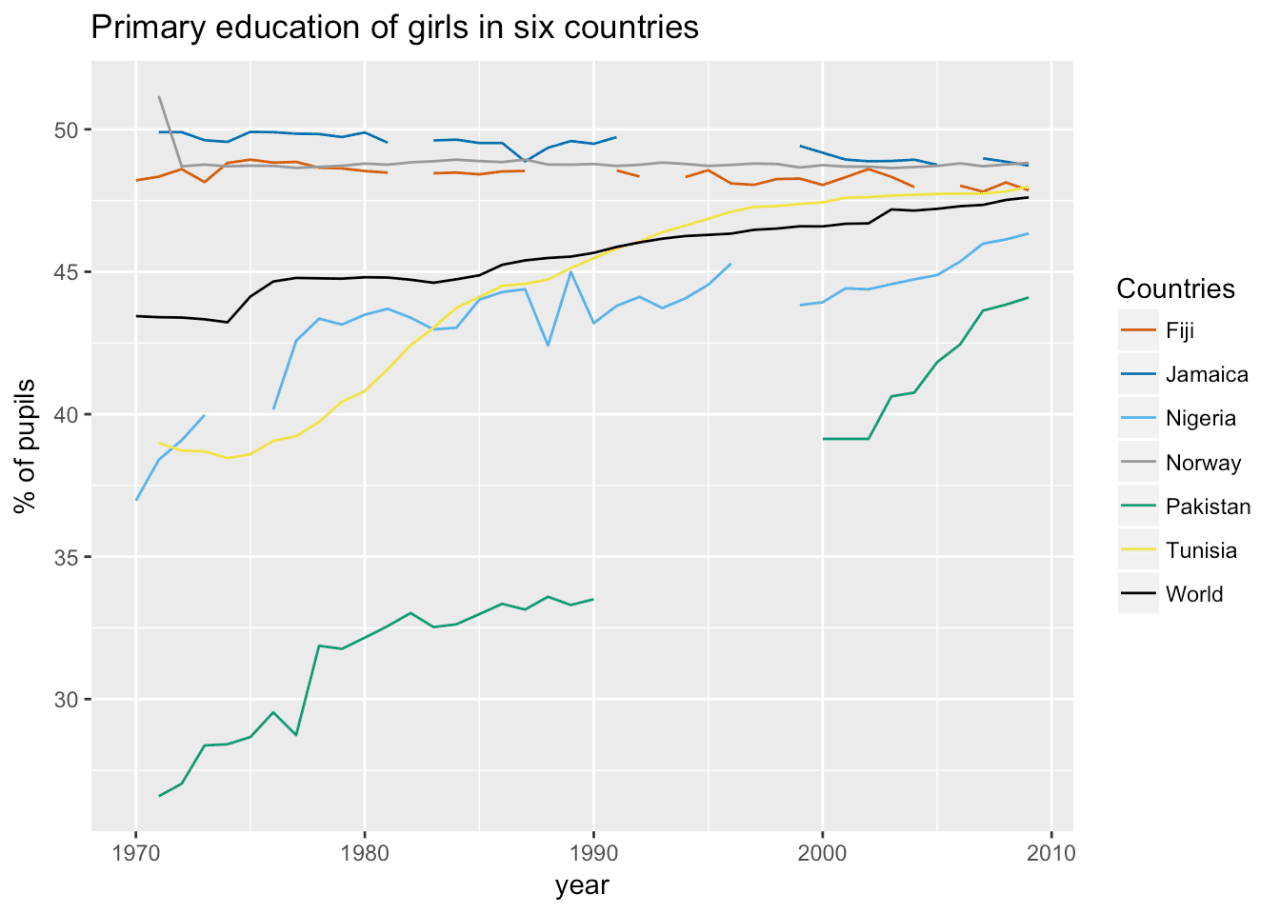 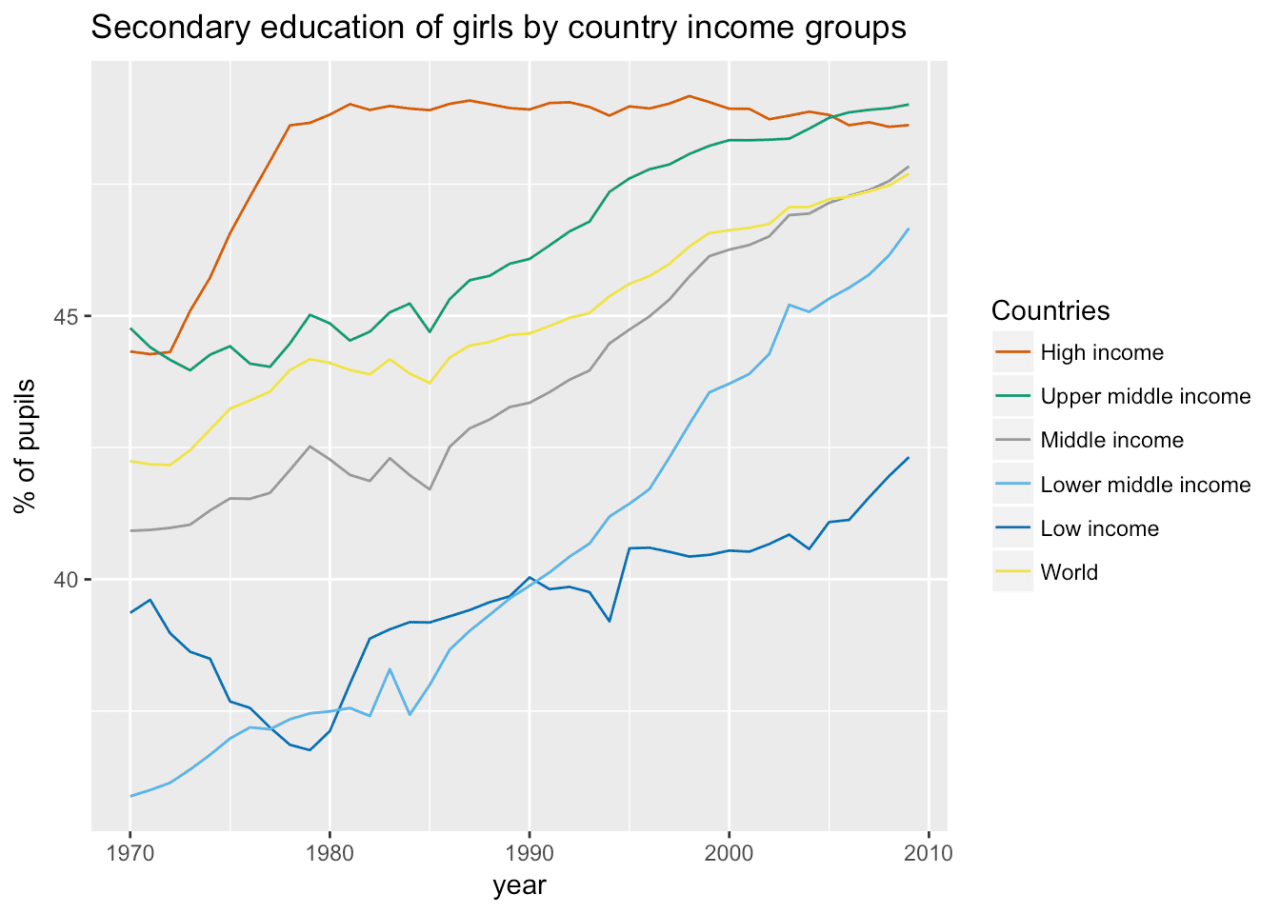 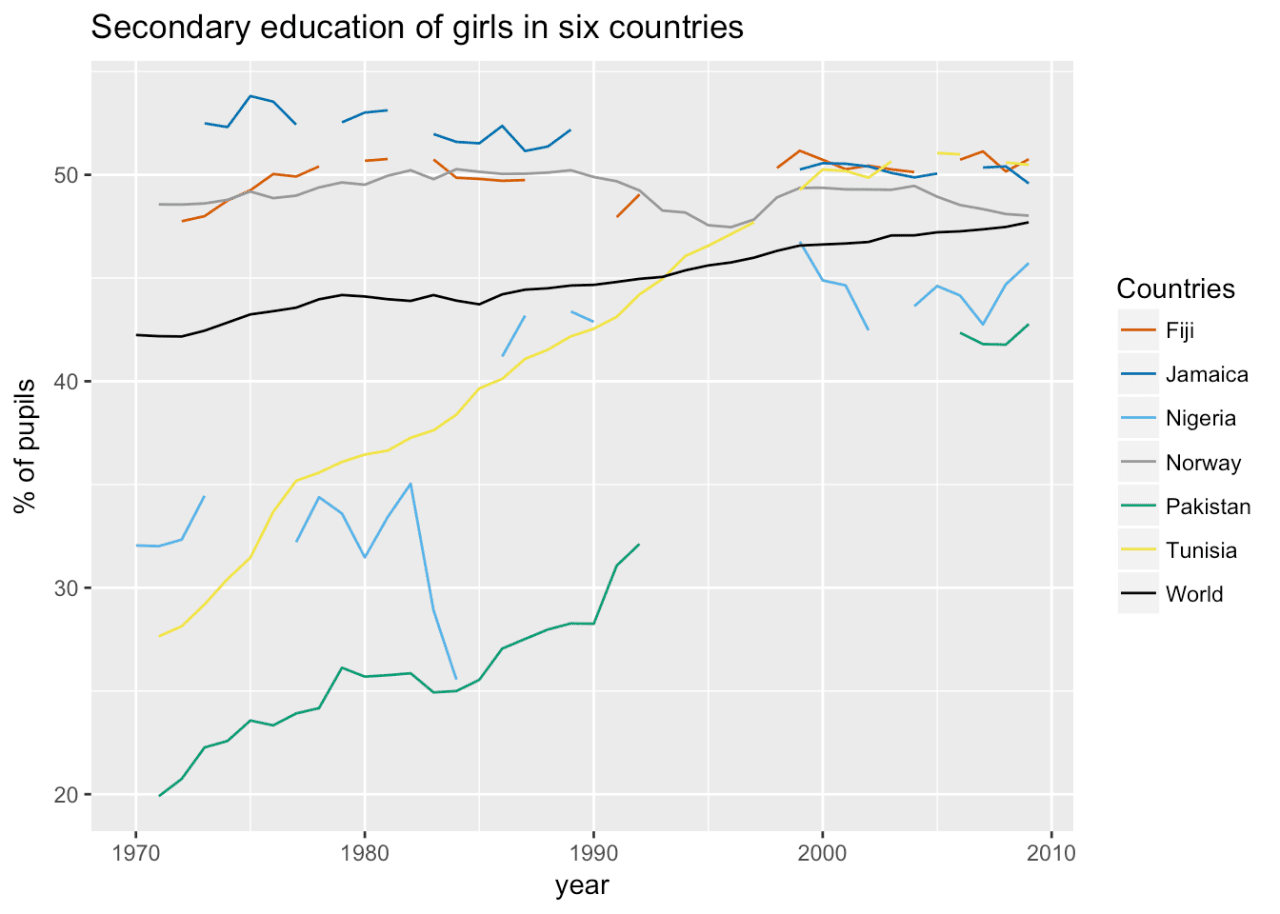 Mostly, employment data in the WDI doesn’t get going until the 1990s. But the education data does contain some information about the gender of primary school teachers. (One of the oddest gaps in the country data is that this isn’t recorded for Norway. The data for secondary school teachers is even bittier and I decided not to include it.)

I already knew that in Britain primary school teaching is a heavily female profession, but I didn’t quite realise how far this extends across high income countries generally. The global trend seems to be in the same direction, but much more slowly in the low income countries group. 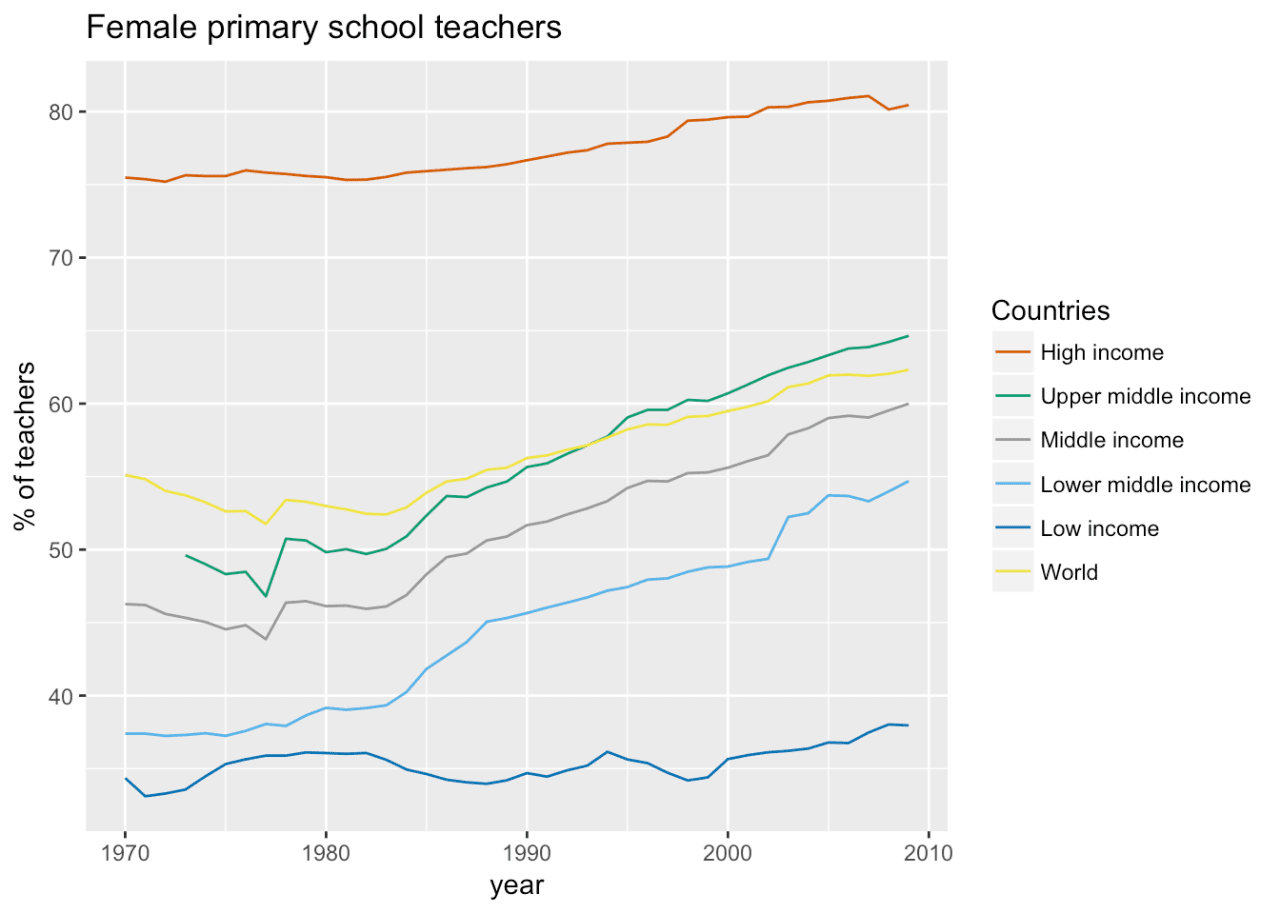 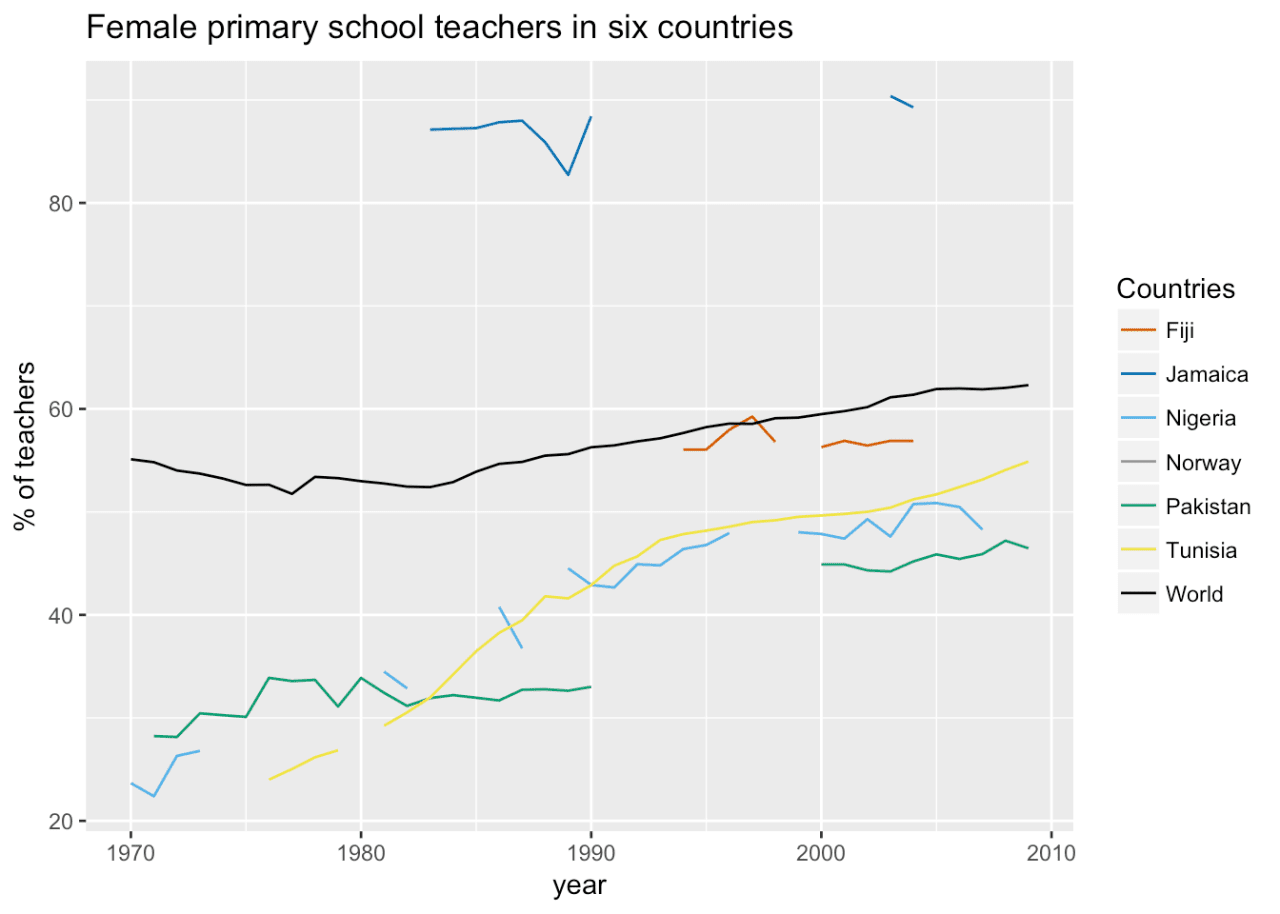 Code and data on GitHub